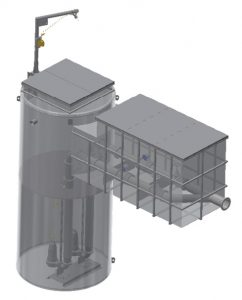 Pumping station shafts are made out of polyester resin reinforced with glass fibers and therefore have excellent anti-corrosion resistance. They also have good resistance to stress encountered during the operation and installation of the pumping station.

OPERATION: Pumping stations are constructed either of single or several chambers. The basic design of the pumping station consists of a single chamber with pumps. Additional chambers serve either as retaining tanks, cleaning shafts or relieving shafts.

Waste water is fed into the lower part of the pumping station shaft – also called the ‘pumping chamber’ – via one or more inflow sewage pipes. In order to prevent damage and/or clogging to the pumps and pressure pipes, a screen grid can be installed after the inflow pipe.

As soon as the level of waste water inside the pumping chamber reaches a preset value, the pump is switched on. Pumps are switched on and off via level switches or suitable sensors. Pumping chamber dimensions, and the level for start of the pump, are determined in accordance with inflow quantity, pump capacity and the number of pump start-ups in one hour. Two pumps are always installed in one pumping station so that, in case of emergency, continuation of operation can be assured.